X OVER RIDE makes the Kitzsteinhorn the place to be 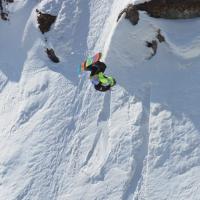 On March 28th, the season finale of freeriders will be celebrated with the 3* X OVER RIDE at the Kitzsteinhorn. When it comes to both, a starting place in the Freeride World Tour and the ranking of the Austrian Freeride Series (AFS) the challenge is, to find the best line and score points at the face called ‘Lakarschneid’.

Zell am See-Kaprun is once again in the spotlight of the freeride sport. With its prestigious contest X OVER RIDE, Austrian and international top riders make then the Kitzsteinhorn the place to be. The 1,100 Freeride World Qualifier points, which are given away at a 3*Qualifier, can make the difference between victory and defeat, especially for domestic freeskiers and snowboarders: Because the contest at the Kitzsteinhorn is the grand final of the Austrian Freeride Series. The ones, who are going to be in the lead after then, will take the crown as the best Austrian freerider 2015.

However, not only for domestic riders the contest in Salzburg has high priority, also internationals and Freeride World Tour riders are annually travelling to Kaprun to compete at the Kitzsteinhorn. Then they hunt for valuable qualifier points in the battle of a starting spot or to remain in the Freeride World Tour (FWT).

In addition to the starters, also the audience will be spoiled on March 28th at the X OVER RIDE. At 8.30am, the Event Village in Langwied will open for spectators. There everyone has a perfect view of the runs of the rider. The contest will start at 9.30am. At about 2.30pm the award ceremony will take place. In the evening at about 9pm, the season finale will be celebrated at the famous after contest party.