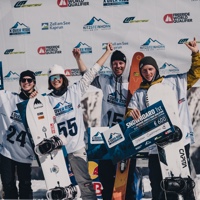 The comeback of the Austrian 3* Freeride Qualifier classic at the Kitzsteinhorn in Zell am See/Kaprun was a complete success with perfect spring conditions and top performances.

The X OVER RIDE on the Kitzsteinhorn is known for years for the great season end and a "get together" of the Austrian, but also the international freeride scene. The joy of reunion was greater than ever this year after 2 years of forced break and so were the sporting achievements in spring-like "slushy" conditions. The winners showed 3s, backflips and the now world famous "moss rides" on the Lakarschneid.

Early in the morning, some riders were still unsure about the conditions. As hard as the nightly cold had made the snow cover, it was quickly softened by the morning sun. The decision of the Head of Safety Markus Kogler to start punctually at 09:30 proved to be very good again and the conditions were soft from the beginning to the end, but fair and consistent. So it was set for the great freeride show on the Kitzsteinhorn Zell am See/Kaprun.

Olivia Riedel was able to win her very first 1* contest this year with a wildcard. She reached the starting field at the X OVER RIDE by winning the Ride & Shine Online Contest, where 3 wildcards and a mentorship were awarded by submitted videos. Olivia's mentor was none other than Timmy Schröder, who obviously prepared her perfectly for the Lakarschneid. With a solid run and many smaller but confident drops, she narrowly edged out World Tour proven Mikaela Hollstein from Finland, who skied a line in the very steep final chute but didn't quite go flawless this time. Germany's Pilar Bergevoet took third place.

Swiss victory in the snowboard men

Stefan Gartmann from Switzerland prevailed with a very special line and late start number. He chose - like no other on this day - the very steep "Riders left" chute and convinced not only with a fluid run, but especially by his "line management", the judges. Second place went to Austrian Florian Handschuh, who skied a similar line to the winner, but was not quite flawless. The Spaniard Dani Sanchez Ballestero convinced with a lot of freestyle tricks spread over the whole face and ended up in third place.

The "4-Star-Contest" experienced Andi Jenewein was a class of his own. Right at the start he showed a backflip followed by extraordinarily fluid and fast riding in the middle section and a 3s, i.e. a turn around his own axis. In the steep bottom “goloir” he was the only one to convince the judges with another 3 and on top of that he skied the last third of the chute at high speed. With 88 points Andreas Jennewein took the first victory at the X OVER RIDE. With a similar run, Maj Stirn from Slovenia placed second, only 3 points behind. Third place went to Jakob Ernst, another Austrian with a now world-famous "Moss Ride" line. In the lower steep gully area of the Lakarschneid there is a line that can only be mastered by skiing mostly open moss areas and direct cliff jumping over several meters. A sensational line, which Jakob Ernst caught perfectly on this day.

Anna Gurschler is the surprise winner in the women's ski race

It was only her second contest and she prevailed with a unique line and a lot of speed right away at this first 3* Freeride World Qualifier. A huge success for the young Austrian. Second place went to Czech Monika Novakova with many smaller "drops" and a line into the lower, very steep final chute. Third place went to Claudia Klobasa, another Austrian, who jumped a really high cliff in the lower steep section and only lost a better ranking due to a slightly unsafe landing.

In an exuberant mood and absolute "spring conditions", the contest season was celebrated again this year at the event on the Kitzsteinhorn in Zell am See/Kaprun. Organizer Christian Geissler was overjoyed and thanked the numerous partners and riders for this absolutely successful and emotional comeback after a 2-year break. The X OVER RIDE is back and we all look forward to the continuation of this traditional competition in 2023.

Those who want to experience the contest and the unique atmosphere re-live can do so on the Facebook or YouTube page of X OVER RIDE.