X OVER RIDE 13 | Freeride finals at the Kitzsteinhorn 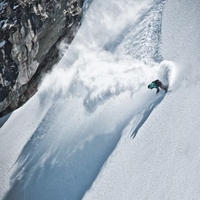 From 22nd to 23rd March the big finals of the Austrian freeride season, the X OVER RIDE Freeride World Qualifier * and *** took place at Kitzsteinhorn, Zell am See - Kaprun. On this weekend, for the very first time, the Austrian Freeride Masters were crowned. Those are Liz Kristoferitsch and Flo Orley on snowboard and Angelika Kaufmann and Martin Rofner on skies.

After eight qualifier events of the Freeride World Tour in Austria and the big final at Kitzsteinhorn X OVER RIDE, the Austrian Masters have been determined. Snowboard-Pro Flo Orley wins the X OVER RIDE with a smooth intelligent line including the highest drop of the day. He not only wins the qualifier but also the Austrian Freeride Masters.  “I came to Zell am See-Kaprun with mixed feelings, I knew that I had to get a good run, and really ride hard to get the title. Therefore, I chose a sophisticated line. It’s my 14th year as a Freeride-Pro, but the Austrian Master was crowned the first time this season. For me it’s a pleasure to win this title at my age”, explains the 37- years- old Orley.
Even before the X OVER RIDE the winner of the men's ski category was fixed with Martin Rofner, the awesome skier from the Arlberg could win four of seven OPEN FACES competitions but could not compete at the final at the Kitzsteinhorn due to illness.

Although Geli Kaufmann could not score in the final competition at the Kitzsteinhorn, she had enough points for the title: "It feels very good to be Austrian champion. I did not expect it, because my season was rather mixed. But it's perfect and I am extremely pleased. The face of today was super cool and offered many features. "
With the second place in the X OVER RIDE 3 * Liz Kristoferitsch from Styria took the first national snowboard freeride  title: "Sensational! Mainly cause of the fact that this title has been awarded for the very first time. I am happy that I could be there. My winter was just great; I was on the podium at every contest, finished 2nd in Hochfügen, first at OPEN FACES contest in Stubai and finished second again now at the X OVER RIDE. These are results you can only be happy about. I am excited about the face ‘Lackenschneid’ with its many different features and opportunities. The conditions were not easy today, but the same for all. I was happy from top to bottom. "

Two great days at Kitzsteinhorn, with lots of powder and blue sky made â€‹â€‹the X OVER RIDE again a special experience for riders, spectators and organizers. Head of OC, Organizer Chris Geissler was satisfied: "Our 10th anniversary brought us two fantastic competitions. We would like to say thank you to our partners Kitzsteinhorn and Zell am See-Kaprun, which make the X OVER RIDE possible and are open to any of our ideas. 10 years ago the X OVER RIDE started as a small competition. Over the years it has grown to a Qualifier event of the Freeride World Tour and the fact that some World Tour riders were starting is a great honor for a 3-star qualifier. We are very motivated to become a four-star event. The X OVER RIDE will evolve in the upcoming years. "