Terrific freeride finals at the X OVER RIDE 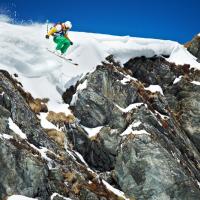 A bluebird powder day for the finals of the AUSTRIAN FREERIDE SERIES, the legendary X OVER RIDE at the Kitzsteinhorn really held what it promised and also crowned the new AUSTRIAN champions, which are Jacoba Kriechmayr, Julian Zenzmaier, Manuela Mandl and Thomas Feurstein, but only Feuerstein underlined his title with winning the last Austrian contest.
Just in time for the 12th edition of the X OVER RIDE in Zell am See-Kaprun on Saturday the sun over the face called ‘Lakarschneid’ came out. The Kitzsteinhorn presented itself with great conditions and some fresh snow on top. More than seventy riders from 15 countries came to take part in the legendary contest and the big showdown of the Austrian Freeride Series at the X OVER RIDE Kitzsteinhorn. For many riders it was the grand final after eight Austrian contests, high-level-freeriding, great lines and tricks were shown.


Kriechmayr from Salzburg is the new Austrian Freeride Champion
Within the category ski women, the duel of Sabine Schipflinger and Jacoba Kriechmayr from Salzburg was soared to new heights, as Schipflinger showed off with a technical run on the right side of the Lakarschneid. Top favorite Jacoba Kriechmayr had to stand back with the 10th place in the final 3*FWQ X OVER RIDE but saved a razor thin lead over Schipflinger, who ended the X OVER RIDE 2015 with a podium. Friend and rival Jacoba ‘Jay’ Kriechmayr however, was celebrating her first AUSTRIAN FREERIDE SERIES title in her comeback season, ‘I am extremely delighted. The title is the best thing to happen to me this season. I certainly would have planned more for the X OVER but thank god, I had enough cushion. I am super happy.’

The victory of the X OVER RIDE took the Viennese Claudia Klobasa. The two-time Austrian Champion in freestyle moguls impressed the judges with a speedy straight line and a few smaller drops and celebrated her first victory in a 3*Freeride World Qualifier, ‘I had to pay a lot of dues, I guess this is the propitiation for it. It feels simply amazing, to win in this atmosphere. Also the snow was just awesome’, Klobasa resumed after her contest run. Surprisingly, Dutch girl Berber Semmelink who lives in Zell am See went in third place.


Hollsten keeps winning and Mandl is Austrian Freeride Champion
With a Double Drop and a third place at the X OVER RIDE the Viennese Manuela Mandl in Zell am See-Kaprun jumped to the second AFS-title-victory of her career, ‘The AUSTRIAN FREERIDE SERIES title means a lot to me. It really can be written in your resume and of course, I will fight for the triple next year. In addition, the X OVER RIDE at the end of the season is one of my favorite events.’ Rank one went to the most dominant freerider of the Freeride World Qualifier season 2014/15, the Finnish snowboarder Mikaela Hollsten, who will be competing in the Feeride World Tour next year. Austrians Bettina Pickl catapulted herself on rank two with a technically strong line.

Siobhan Challis from Kaprun achieved a little surprise on home soil. Due to a strong fourth place at the X OVER RIDE she also secured the runner-up title in the AUSTRIAN FREERIDE SERIES.


‘Theking’ is the new AFS Master; Sebastian Maier took second win of the season
The male freeriders used the perfect conditions to persuade the audience with brilliant runs and tricks. From a backflip by the Swiss Max Vaquin to a cork 3 by the Tyrolean Clemens Bergmann, a great show was shown to the spectators.
At the big showdown the freeskier Julian Zenzmaier showed strong nerves in the battle against his rival Michael Strauss and made his nickname ‘Theking’ all honour, ‘I knew that Michael would  go big, so there was no way to do a safety line. I am super happy. I will celebrate the title condignly and try to defend it next year’, said the new Austrian Freeride Champion, who won his first title of his career watched by his mother and sister. In the ranking of the X OVER RIDE he got ranked fifth.
The victory of the X OVER RIDE within the ski men took a Tyrolean. The technically advanced skier Sebastian Maier from Erl in Tyrol secured, due to another strong run, his second win of the season, ahead of Sweden's William Larsson and the German Marian Losch. ‘I would have never expected the victory in this strong field today. The X OVER RIDE is a brilliant event,’ Maier said.


Big winner of the day: Thomas Feurstein
Also within the snowboard men, the final decision between Clemens Bergmann and the Thomas Feurstein was made at the Kitzsteinhorn. Only 330 points separated the two rivals before the last contest of the season. In the end the long-term leader of the Austrian Freeride Series, Thomas Feurstein, took not only his third win of the season, but also his first AFS-title, ‘From the caretaker to the freeride champion,’ grinned the snowboarder from Vorarlberg,  ‘All above, it is awesome that I could win the X OVER RIDE at my first appearance, just a great feeling’, Feurstein continued. Marcel Loschin from Salzburg came second and the Viennese Franz Magdics ended up third in the purely Austrian podium within the snowboard men category.


Results of the 3*FWQ X OVER RIDE: